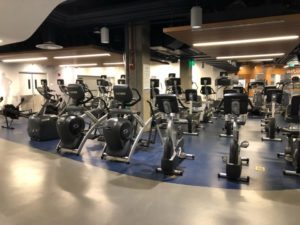 WESTWOOD—Sources inside the Bruin Fitness Center (B-Fit) weight room confirmed on Monday that the campus gym was again playing that song that they always play. “I was working out and they were playing some decent stuff: Beatles, Kendrick, even some old Kanye; and then, right as I was about to do my set, they put that one annoying Chainsmokers song on again,” said second-year student Chase Davidson, who could not name the title of the song but added that it was on the radio a lot in 2014 and was included in his high school’s prom playlist. “It’s like the person working at the front desk made a three-song Spotify playlist of embarrassing throwback songs and put it on an endless loop. God, again with the fucking autotune!” According to sources who worked out at B-Fit later in the week, the employees had shifted to exclusively playing sad Lana Del Rey music during peak hours.