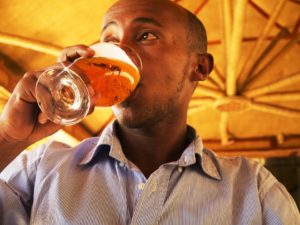 WESTWOOD—Earlier today UCLA student Scott Arnedt told his a friends a funny story that could be completely attributed to his debilitating alcoholism. “Last night I was so drunk that I tried to brush my teeth with a hairbrush. Hilarious!” said Arnedt, whose roommates found him naked and unconscious in their bathroom the same night. Whether Arnedt left out the detail because he felt it took away from the story’s humor or because he had no recollection of the event remains unclear. “It was almost as funny as the time I drank ten beers and tried climbing a street light. Does anyone want a drink?” said Arnedt, who had been subsequently arrested for assaulting a police officer the night of the incident. While some of his friends have expressed concerns over his drinking, Arnedt argues that he does not have a drinking problem and could quit anytime he wanted.