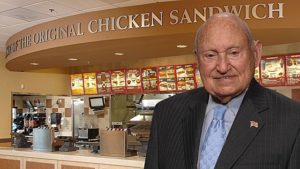 ATLANTA–Following outrage over Starbucks’ lack of Christmas imagery on its holiday cup design, Chick-fil-a announced plans to release a seasonal “Happy Birthday Jesus” cup, declaring its official involvement in the “War on Christmas”. “What we’ve got here is your classic case of pushing a caffeinated liberal agenda down America’s throats,” Chick-fil-a CEO Dan Cathy said. “By not mentioning anything of our lord and savior, Starbucks is essentially telling people that Christ does not exist.” Starbucks’ cup, which features hundreds of faces drawn with a single line, is said to symbolize connectivity between diverse populations. However, Cathy stated that he sees this integration as plainly blasphemous. “Customers want coffee, not pagan brainwashing.” Although they have not released an official design to the public, sources say the cup will feature Jesus on the cross to remind customers that they cannot celebrate his life without acknowledging his death for our sins.