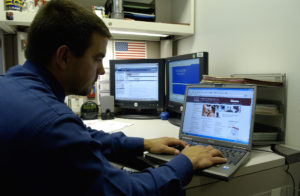 LOS ANGELES–Since graduating in 2009 with a degree in Applied Mathematics, UCLA alum Jack Hudson has been doing nothing particularly special with his life over the last seven years. “After I left UCLA, I immediately started my career as an entry-level accountant. The ultimate goal is to become tax manager and then I’ll have really made it,” Hudson said. Reflecting fondly on his time at school, the alumnus credits his college years as formative to his future ambitions. “UCLA taught me to really accept my mediocrity, and that not everyone can be as successful as they expect to.” However, Hudson made it clear that his life has not been as mundane as a nine-to-five accounting job would imply. He has recently started watching Game of Thrones and can get through half an episode before falling asleep, usually around nine o’clock.