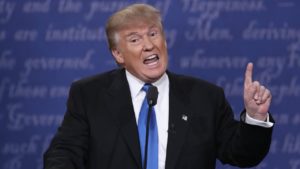 NEW YORK, N.Y.—Citing the the cast of Hamilton and their address to Mike Pence last night, Donald Trump today announced his plan to create safe spaces for bigots . “It’s disgraceful, really, how the cast of Hamilton bullied Mike for his views. Unbelievable how intolerant this country is. The theater should be a safe space for bigots of all creeds, whether they be homophobes, misogynists, or racists.” Despite his strong opposition to the “PC police” and “mollycoddled college students”, Trump stands by his plan, stating, “This is a plan to protect oppressed Americans with no political voice, like Vice President-elect Mike Pence, from facing criticism for their regressive and incendiary views.” At a press conference today, Trump spokeswoman Kellyanne Conway reported that Trump would not be leaving his penthouse today as he felt the public eye was not a safe space for him.