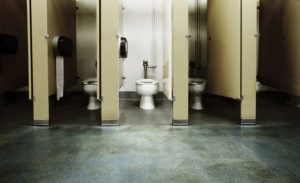 WESTWOOD—Having already drawn down his pants and committed to a bowel movement in a public bathroom, Statistics major Steven Chu received a massive thrill when he realized he had not locked the stall door. “I knew that at any moment someone could open that door, expose me, and I had never felt so alive,” said Chu, planting a hand against the wall to steady himself. “Never have I lived so dangerously, skirting the boundary between civility and utter chaos. The seconds passed like hours as I sat helplessly, totally submitting myself to the will of the universe. It was—transcendent.” Come newshour, Chu was caught in another euphoric reverie about a time he tried on an outfit at JC Penney’s with the door slightly ajar.