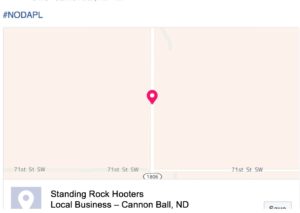 STANDING ROCK, ND—Following a proliferation of online activism regarding the Dakota Access Pipeline, sources report that area man Mike Gianni showed his solidarity with indigenous people by checking into the Standing Rock Hooters location on Facebook.

“Water is a basic human right, and so are buffalo wings served by a busty brunette!” wrote Gianni, geotagging a back alley ten miles away from the protest location.

In response to police brutality against peaceful protestors, many progressive and socially-conscious Americans showed their support for the Sioux by checking in at the Standing Rock reservation. Rumors report that the local sheriff’s department has been using Facebook to target protesters, because somehow that makes sense.

“It’s really brave what Mike did,” shared childhood friend Beck Hudson. “I wonder if his wife saw the update.”

“What a bad-ass political statement!”

At press time, Gianni uploaded a second status to clarify that he did not actually travel to Standing Rock Hooters, but just wanted to “play his part” in the native resistance by contributing nothing but several online Facebook statuses.