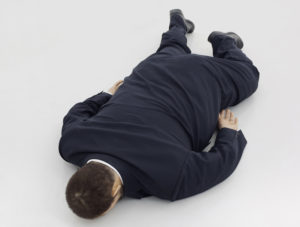 SANTA MONICA, CA—Lying curled in a fetal position upon the floor of his kitchen, area man Andrew Pacheco repeatedly declared sadness and loneliness to be social constructs, neighbors report. “Sadness, loneliness, they’re just artificial fabrications created by a society founded upon false equivalencies. There is no such thing as sadness; it is merely the artifice of a vindictive social order that seeks to posit a normative conception of the ideal self, and to inflict shame upon those who feel to meet this standard,” said Pacheco, banging his fists on the floor and sobbing into the tiles. “There is no loneliness; only the panopticon of social dominance attempting to isolate us and trap us in an endless loop of self-policing, whereby we inflict mental torture upon ourselves for not engaging in social interaction.” Neighbors reported that the sobbing and pontification came to an abrupt halt after the tenant next door banged on Pacheco’s wall and insisted he “shove his social constructs back where they came from.”