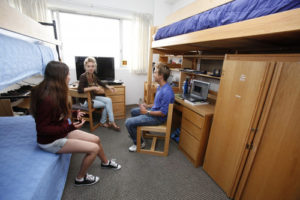 WESTWOOD—After lingering in the hallway for a substantial portion of the morning, your hallmate, Sociology major Steven Carlinsky, expressed his desire for you to check out his sick-ass dorm setup. “You’re not gonna believe this bro, it’s like, such a badass pad,” Carlinsky said, obstructing the path between you and the elevators. “Alright, check it: so, I’ve got these ginormous speakers that go ‘boom boom boom’ y’know, like really shake the walls, then I’ve got a lava lamp three feet tall that doubles as a hookah, ‘cause you know I smoke that sweet stuff, and then I’ve got this huge—well, you’d understand better if you saw it,” added Carlinsky, now actively corralling you into his dorm room. Carlinsky was later seen installed in his doorway just nodding at passersby, unable to solicit tours because of the inhibitively loud volume of his rap music.