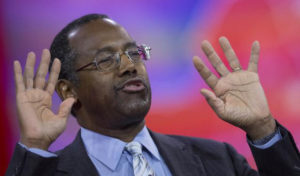 WASHINGTON–With Donald J. Trump’s transition team still filling positions in his cabinet, the president-elect has announced the appointment of retired neurosurgeon and former primary rival Dr. Ben Carson to remove the stick that vice president-elect Mike Pence has had chronically lodged up his ass.

“Mike is a great, great man. Terrific. But I do worry that he has a stick up his ass,” said the president-elect during a press conference at a Miami strip club. “I mean, conversion therapy? I love the gays. We can’t be shocking the gays. He also doesn’t smile enough. Why is his face like that?”

Following several minutes of unintelligible and logically disconnected banter, Trump made his announcement. “I have appointed my good friend, Dr. Ben Carson, to remove this stick from Mike’s ass. He is a tremendous doctor, probably the best doctor, we have the best doctors here,” said Trump, for some reason turning increasingly orange. “No longer will we have these establishment politicians with sticks up their asses. I think Ben is the perfect person to drain Mike’s swamp, so to speak. Mike is a very good man, a man I trust, but we’ve got to get this stick out of his ass.”

Standing behind Trump at the podium, Pence looked onward, nodding in agreement to Trump’s words before taking over the microphone.

“It is with great pride that I accept our president’s appointment of Dr. Carson to remove this stick from my ass,” said Pence, visibly clenching his buttocks as he stood before the crowd of reporters. “I offer this sacrifice not only to better myself, but to better the country. I am going to make myself great again, and we are going to make America great again.”

When reached for comment, Dr. Carson claimed that he had no intention of accepting the role, as he has no government experience and has also retired from surgery after removing his own brain.